Shopify and Etsy are two of the most popular online marketplaces for selling handcrafted items.

You might have begun with Etsy and are now seeking to move to Shopify, or you may be weighing the option of maintaining a store on both platforms. There’s no need to worry; yes, Shopify and Etsy integration is feasible.

So, before we go into the various methods for doing it, why would anybody want to connect Shopify and Etsy? It’s essential for shop owners to link Shopify and Etsy in order to:

You should sell on Shopify, Etsy at the same time only if you have a following that supports it. It will be determined by your audience, the items you’re selling, and the long-term strategy you’ve devised for your company.

Let’s pause for a moment before we dig into the integrations.

The Challenges of Managing both Shopify and Etsy Store

It’s easy to assume that expanding your business to additional platforms would be straightforward. Managing a company in two locations at the same time necessitates more effort and concentration.

However, when the two options are linked, the advantages usually outweigh the drawbacks. A disadvantage on one platform is frequently offset by a benefit on the other.

The Benefits of Integrating your Shopify and Etsy Stores

Both Shopify and Etsy are excellent platforms for entrepreneurs with a fantastic product and the accompanying needs of running a business such as marketing, shipping, and customer service.

The Etsy market is an ideal location for new enterprises, and it already includes a built-in client base. And as your company grows, Shopify aids in the growth of your business. As you use both tools, you may notice that they seem to bestow upon your firm with a mysterious power.

Benefits of Etsy include:

Benefits of Shopify include:

Should you use Shopify and Etsy together?

Before you try combining Shopify and Etsy, consider the key features of each:

The primary distinction between the two platforms is their target audience: one targets garage and DIY enthusiasts, while the other caters to more mainstream consumers.

Every platform has its own set of advantages and drawbacks. Because they are so flexible, each platform may benefit your ecommerce efforts in various ways.

Shopify’s greatest feature is undoubtedly its flexibility. Shopify also offers scalability, and it is particularly well-suited for businesses that expand. Etsy, on the other hand, provides you with access to a large community of buyers and a simple, non-technical installation. 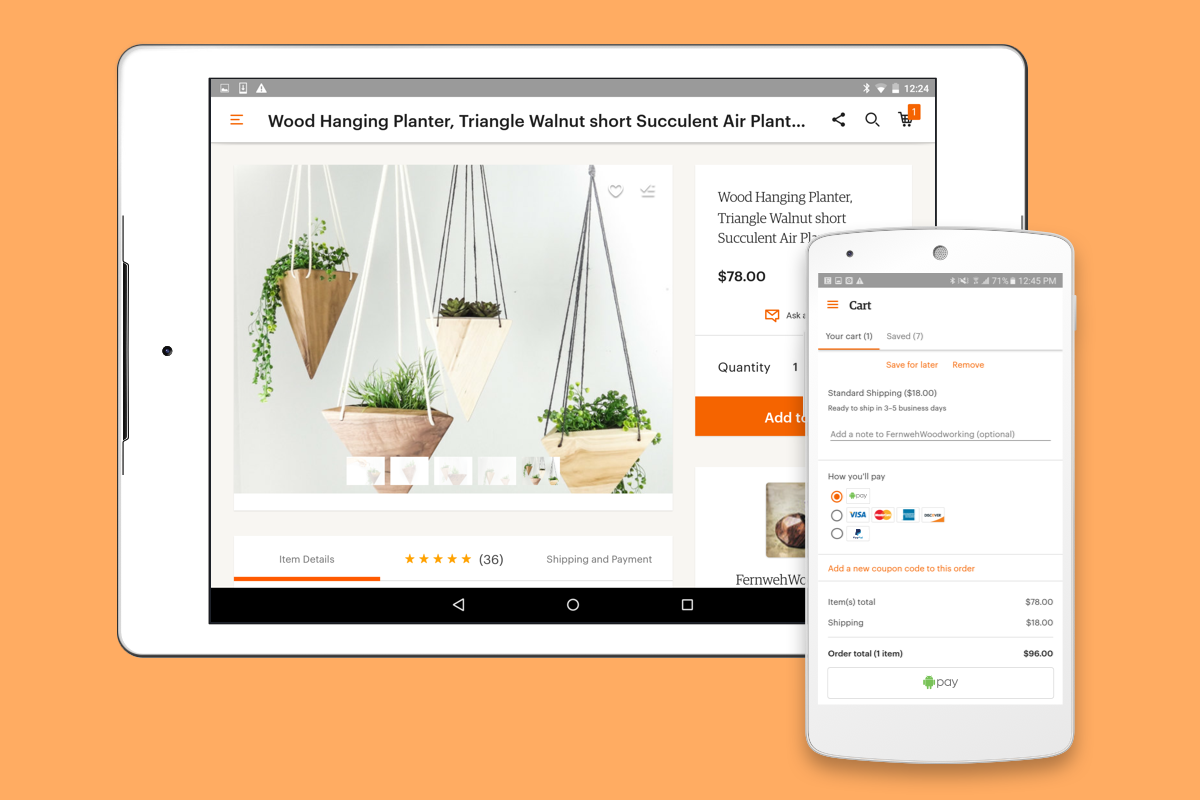 Because of these variances, some business owners opt to sell on both platforms at the same time:

If this is the situation for you, it’s time to evaluate your alternatives of combining both Shopify and Etsy.

How to integrate Shopify and Etsy?

There are several ways you can go about connecting Shopify and Etsy:

Let’s take a look at them in order to see which one suits you best.

Connecting Shopify and Etsy is a simple exercise in connecting both platforms, which may be accomplished using their APIs.

An application programming interface (API) is a computer interface that defines interactions between software. Platforms like Shopify and Etsy provide authorized developers with API keys, which allow them to write applications and solutions. They can then sell their creations on each platform’s marketplace.

If you’re reading this, it’s safe to assume that you’re not seeking a step-by-step tutorial on how to build your own Shopify and Etsy API integration.

Fortunately, there are several simpler options to accomplish this.

Professional agencies and specialists are available to assist you with your integration needs (at a price) for large businesses and huge budgets.

In the “Shopify Experts” section on their website, Shopify includes listings for these approved partners, including everything from store creation to branding consulting and Etsy-Shopify connections.

Etsy’s general search also turns up specialists for hire, and experts on both platforms are advertising their services on freelancing websites like Upwork and Fiverr.

While using a service like this may be beneficial for businesses with hundreds of listings, it is also the most expensive: rates for a complete transfer from Etsy to Shopify range from $500 to $4000 or more.

For a less expensive option, both Shopify and Etsy give their customers the ability to manage their integration with apps on their marketplaces.

Native marketplace integrations are Shopify and Etsy app marketplaces features and applications that are immediately available.

Here you will find two subtypes of integrations:

Some entrepreneurs, particularly those with a physical store, may want to offer both Shopify and Etsy. Whether you’re thinking about it or not, there are some applications available that can help you combine the two systems for you, including:

These are some of the most popular options for connecting with Etsy shops in the Shopify app marketplace.

Now that we’ve discussed platform administration, it’s time to talk about moving from one platform to another.

Where does one go to migrate from Shopify to Etsy, or vice versa?

Migrating from one platform to the other

Migrating from Etsy to Shopify is simple thanks to the simplicity of the platform. All you have to do is follow the directions available on their Help Center.

While the migration process is easy to understand, it will necessitate you to edit CSV files and follow a series of technical procedures.

Shopify’s app marketplace also has a range of apps for a less technical approach, including Etsy to Shopify:

Migrating from Etsy to Shopify is more common than the other way around, owing to Shopify’s popularity as a platform for growing an online business.

As a result, the range of options for moving your Shopify store to Etsy is somewhat more restricted.

However, third-party integrations can help you resolve this issue.

Native marketplace integrations may be a good investment, but the costs of doing so can quickly mount up. Especially if you wish to run both platforms at the same time.

Enter this world of third-party integrations. Automation software like Integromat can aid you in connecting Shopify and Etsy, allowing you to pick what you want to do.

eCommerce Automation tools, on the other hand, provide a lot of creative flexibility and are not limited to a single-use scenario. Integromat includes a list of triggers, searches, and actions for both Shopify and Etsy that may be combined to produce any number of situations.

Can I sell Etsy products on Shopify?

Yes. You can use Shopify and Etsy Connector App, which allow Shopify users to connect their sites. You can use your Shopify store to sell Etsy goods and obtain inventory and product management.

How do I transfer my Shopify items to Etsy?

Shopify’s native integration with Etsy is the simplest way to migrate items from Shopify to Etsy. The Etsy Marketplace integration provides a comprehensive set of capabilities, including Shopify-to-Etsy features that you will appreciate.

Step#1: To connect the two apps, log in to your Shopify account and head to the Shopify app store.

Step#2: Pick the Etsy option and add the app.

Step#3: You will then be redirected to the Etsy page.

Step#5: Follow the instructions for syncing the two apps and the stores will be linked – allowing you to use them.

How do I import an Etsy review to Shopify?

Yes, you can get Etsy reviews and import them into Shopify. You may use the free Shopify Product Reviews app or another review software such as Shuttle Transfer and Reviews Importify to import and export reviews to Shopify.

If your CSV file is formatted correctly, then you can import your reviews. Follow these steps:

You’ll get a CSV file with your downloaded data on your browser.

Use this post to walk you through the procedures for integrating Shopify and Etsy stores if you’re ready for the combined retail might of an integrated Etsy and Shopify shop.

There are benefits and drawbacks to both native and third-party app integrations, and it will be up to you to choose.

If you’re searching for a no-nonsense solution that won’t break the budget, and integration available on the Shopify App Store is probably your best bet. While these applications may soon rack up a hefty price tag, they are focused on performing a single function, which has its advantages:

If you’re looking for more control over the integration, an automation tool like Integromat is a viable option:

It all depends on your priorities as a business and the aims you want to achieve through using Shopify and Etsy at the same time. The good news is that it’s feasible, and there are solutions available to help you make the most of both platforms!

Let’s get to selling!

Ramachandiran Karthik is the Digital Marketing Manager at Adnabu. He loves to help Shopify stores grow their business with Google Shopping & Google Ads, using advanced features like multi-currencies, multi-languages, Metafields. Karthik has a lot of experience in digital marketing and enjoys exploring new ways to make advertising more effective for both advertisers and customers.